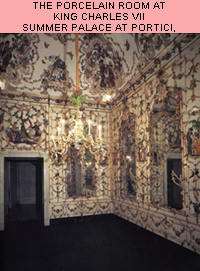 The Story of Capodimonte

Many of our customers are not sure what Capodimonte means. It is a style accredited to the very finest Italian porcelain, and its fascinating origins date to the eighteenth century when Charles VII of Naples and Sicily took Princess Maria Amelia Christina of Saxony for his bride on October 31, 1737.
A portion of the Princess's fabulous dowry consisted of extraordinary examples of Meissen porcelain produced in her father,s royal workshop. An enlightened supporter of the arts, Charles immediately resolved that such beauty should be produced in Italy as well.
In 1743, The Royal Manufactory of Porcelain was erected on the grounds of the royal place. It stood high atop a hill, and it soon became known to all as Capodimonte, which means top of the mountain.
A school, The Academia del Modello, was also established to train talented young artists in the painstaking techniques of ceramic sculpting. Many years passed, and Charles was granted his wish as exquisite Italian-made tea sets, coffee services, statues and tureens began to appear at court. Unable to enjoy the beauty of flowers in bloom because of his allergies, he directed his workshops to create delicate floral arrangements in porcelain, each a precious tribute to nature,s real, but all-too-fleeting beauty. Soon the royal palace overflowed with porcelain bouquets of incredible artistry and sumptuous color. The tradition of Capodimonte flowers had begun.
The crowning artistic achievement of Charles VII remains the porcelain room he created for his bride in their summer place at Portici. The ceilings, walls and floors were constructed entirely of porcelain and mirrors. This dazzling display of artistry was to inspire his son, Ferdinand IV, to inherit his father,s passion for porcelain.
Ferdinand,s love of the outdoors and sport provided new inspiration for his artisans who captured him and his merry friends and followers in their pursuit of frolic. These delightful figures, originally produced between 1790 and 1800, still evoke the light-hearted spirit of the time.
In 1803, Napoleon ousted Ferdinand IV from the throne, and without the firm hand of its patron, the factory fell into debt, and eventually was sold to a French firm. Ferdinand returned to claim his throne in 1815, but sadly times had changed, and the factory, now in a severe state of disrepair, closed its doors in 1817.
While this could have been a sad ending, it was not. As the artisans made their way back to their towns and villages, they brought with them their spirit, resolve and their skills. Soon hundreds of small shops and factories all over Italy were making available to everyone that which was once reserved for Kings and Queens.

Design Your Own Website, Today!
iBuilt Design Software
Give it a try for Free